According to a recent survey of small business owners, a plan for increasing access to capital ranks as one of the three most important factors in choosing a presidential candidate. Most of the nearly 1000 surveyed, felt that neither candidate addressed the main concerns of small business owners and leaders. Small businesses rely on commercial finance and credit from banks and other alternative lending institutions to buy equipment, hire workers and expand in other ways. But only about a third of the small firms that sought loans in the first half of this year got them, compared with three-quarters of big companies, according to recent data. Policies aimed at giving small businesses easier access to capital are “critical” to nearly half the nation’s entrepreneurs, according to an October survey of owners whose firms bring in annual revenue of between $1 million and $20 million. Neither candidate has specified plans for helping small businesses obtain financing. Without access to capital, small business cannot grow and help improve the overall economy.

You might think taxes are the biggest issue for small-business voters, with all the sparring between President Barack Obama and Republican challenger Mitt Romney over who should get an extension of the Bush-era tax cuts. But business owners rank the differences in the candidates’ positions on health care, the economy and access to capital as more important than their positions on taxes, according to a Wall Street Journal/Vistage Small Business CEO survey. This month’s poll of 797 small-business owners and bosses, to be released Thursday, shows a gaping hole in campaign discussions about small business.

“Neither candidate has done a convincing job to demonstrate that the small-business owner will be better off under his administration,” says Joel Shulman, associate professor of entrepreneurship at Babson College in Wellesley, Mass. “Small-business owners don’t have a clear candidate,” he adds.

Robert Thomas, co-founder of Senior Star Living, a Tulsa, Okla., operator of retirement-living facilities, says the candidates haven’t said enough about the “true” cost of the federal health-care overhaul for small businesses and the overall economy. Mr. Obama has said the health law will make it easier for smaller companies to offer coverage to their employees at an affordable price. Mr. Romney has said that, if elected, he will repeal Mr. Obama’s Affordable Care Act and will allow small employers and individuals to form purchasing pools and buy insurance across state lines.

“I just haven’t heard much dialogue on the true impact to small business and the resultant cost on the economy for this huge paradigm shift in who is paying for insurance,” says the 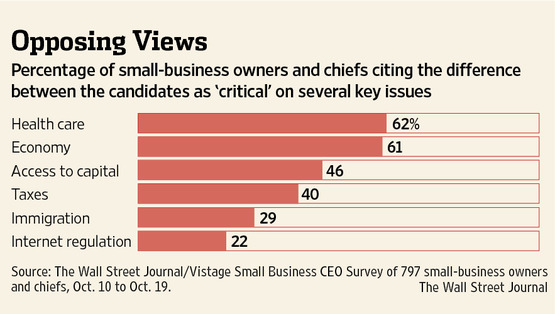 60-year-old Mr. Thomas, a Republican who plans to vote for Mr. Romney. He figures that if all of his 440 full-time workers opt to go on his firm’s health plan when the individual mandate takes effect in 2014, he will need to pay
Small businesses commonly rely on loans and credit from banks and other lending institutions to buy equipment, hire workers and expand in other ways. But only about a third of the small firms that sought loans in the first half of this year got them, compared with three-quarters of big companies, according to survey data from Pepperdine University’s Graziadio School of Business and Management and Dun & Bradstreet Credibility Corp.$720,000 more a year in insurance premiums. Currently, half his workers don’t participate in the plan.

In the debates, Mr. Obama focused on his track record of improving borrowing conditions for small businesses, but didn’t offer any plans for increasing their access to capital. One of his administration’s biggest efforts, a $30 billion small-business lending fund, has gone largely untouched. Only $4 billion was dispersed to community banks, which, in turn, increased small-business loans by just $6.7 billion, according to the Treasury Department.

Nor did Mr. Romney offer details of how he would help more entrepreneurs obtain financing. Instead, he discussed how he would keep more money in their pockets, such as by reducing and simplifying taxes, replacing the Affordable Care Act with what he said would be more cost-effective health-care reform and decreasing federal regulation.

The candidates “blew an opportunity to reach” small-business owners “by not providing specific plans for how they might improve access to capital for small businesses,” says Pat Dickson, associate professor of strategy and entrepreneurship at Wake Forest University in Winston-Salem, N.C. “Without capital, you can’t grow.”

Neither candidate’s remarks on the subject satisfied Mike Bucci, of Henrico, Va., who founded manufacturer K&M of Virginia Inc. after getting laid off from a financial-services firm in 2007. Mr. Bucci, 44, who has one full-time employee and uses contractors as needed, says five banks have refused K&M an expanded line of credit in recent years. He finally secured about $65,000 in bank financing earlier this year, and is using it to expand his line of home-repair and gardening products. “It took 18 months’ of effort for a profitable business to get additional funding,” says Mr. Bucci, an independent who says he plans to vote for Mr. Romney.

Some small-business issues weren’t mentioned at all in the debates, such as whether the government should regulate companies that control the flow on online content to the Internet. So-called net neutrality, however, has come up on the campaign trail.

Mr. Obama has said he supports government oversight of Internet-service providers, but Mr. Romney has indicated that he doesn’t believe government should hold that responsibility.

Nearly a quarter—22%—of the respondents said the candidates’ opposing views on net neutrality are critically important. The survey, conducted jointly by the Journal and San Diego-based executive-mentoring group Vistage, has a margin of error of plus or minus 3.5 percentage points.

Jason Duncan, founder of ManagerComplete LLC, an Austin, Texas, maker of cloud-based management software, wants to ensure that his clients—businesses with multiple locations, such as fast-food chains— will continue to be able to access his firm’s Web application as quickly as they can his rivals’ apps. The 43-year-old independent, whose four-employee business posted annual revenue of $175,000 last year, plans to vote for Mr. Obama because net neutrality is “the only issue for me that matters.”

Another topic that holds great weight for some entrepreneurs is immigration. Thirty percent of the respondents cited immigration as a critical issue.

Mr. Obama said in June that his administration would permit many young illegal immigrants to live and work in the U.S. He has said he favors broader reform combining more secure borders with an expanded legal immigration system. Mr. Romney favors a long-term immigration overhaul but opposes amnesty. He wants to tighten borders and crack down on undocumented workers.

“Both of the candidates are mainly focused on illegal immigrants,” says Huma Gruaz, 45, who owns Chicago-based communications firm Alpaytac Inc. She says she would like to see both candidates delve deeper into promoting citizenship for highly educated immigrants she could potentially hire for hard-to-fill multilingual jobs. Ms. Gruaz, a Democrat, says she plans to vote for Mr. Obama.

The monthly WSJ/Vistage survey has been conducted for five months. In the September survey only, which polled 833 small-business owners, respondents were asked to identify their political party of choice. Most—439—identified themselves as Republican, followed by 244 who said they were Independents. Additionally, 99 identified themselves as Democrats and 44 said they were Libertarians.

The October findings show that small-business owners are slightly less confident about the future. The survey’s index of expected economic conditions decreased to 105 from 106 in September and expected revenue growth declined to 157 from 159. The index of expected changes in employment fell to 141 from 143. But the index of current economic conditions rose to 109 from 101, resulting in the overall confidence index remaining about flat at 95.3.

(Supplement to version titled, “Small Business’s Presidential Pick: None of the Above” by same author/source)

Outstanding loans to small businesses, including real estate and other commercial loans of less than $1 million, have been falling since 2009, according to data from bank call reports analyzed by the Federal Deposit Insurance Corp. In June, the most recent data available, such loans declined to $587.9 billion from $607.6 billion a year earlier, FDIC findings show.In April, Mr. Obama signed the Jumpstart Our Business Startups Act to help small businesses raise capital by easing securities regulations. Under the act, allowing small businesses to raise as much as $1 million in equity funding over the Internet through so-called crowdfunding websites that will have to register with the U.S. Securities and Exchange Commission.

Some critics of that measure, however, say fraud may follow, with unsophisticated investors getting scammed.

Paul G. Merski, executive vice president at the Independent Community Bankers of America, argues that the federal regulatory environment is partly at fault for hampering small-business lending activity. “The additional costs and time dedicated to regulatory burden and compliance is choking off credit,” he says, adding that potential new regulations, such as the proposed Basel III bank capital rules, could worsen the problem.

In addition, he says, poor overall economic conditions are preventing small businesses that want to borrow money from meeting banks’ lending standards. “The economy is not growing fast enough for small businesses to increase sales and show the cash flow they need to qualify for additional credit,” he says.